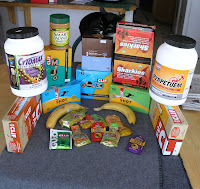 Amaranth, another gluten-free super grain, is the staple of Day 3 recipes. Amaranth packs a wallop when it comes to nutrition but the whole grains can be a bit tricky to work with. It took me three tries before I realized you have to toast the whole grains first before you cook them. No wonder some folks and cats, like Oreo, prefer convenience when it comes to food as you can see from the picture. Oreo investigates a display of pre-packaged energy foods set up by my husband for a newspaper article he was writing.

Amaranth has an interesting history just like quinoa. Amaranth was a staple food to the Aztecs who believed the grain had supernatural powers. Human sacrifices to the grain lead Spanish conquerors in the 1500s to ban its use. As a result, the grain virtually disappeared except for in a few remote places where it was cultivated in Mexico and the Andes.

You don't have to be on a rotation diet or eating gluten-free to enjoy Amaranth. This alternative grain is both nutritious and tasty for anyone. Keep both Amaranth flour and the whole grains on hand.

Amaranth is amazingly versatile as I am discovering. You can cook it as a cereal, grind it into flour, pop it like popcorn, sprout or toast it. Before I discovered grains like amaranth, I thought that brown rice was the only whole grain alternative to wheat. Amaranth is far superior nutritionally with 15-18 percent protein as well lysine and methionine, two essential amino acids that are usually not in grains. It contains calcium, iron, potassium, phosphorous, and Vitamins A and C. Compared to wheat, it has three times the fiber and five times the iron. It also is credited with having two times more calcium than an equivalent serving of milk.

Mix the flour, salt and baking powder. Mix in the vegetable oil. Add the water, working the liquid into the dough. Add additional flour if needed. Shape the dough into a ball and wrap in plastic wrap and allow to rest for 30 minutes. Divide the dough into 6-8 balls. Lightly dust a pastry board and roll out each ball into a circle about 1/4-inch thick. Heat a heavy skillet. Cook the tortillas about 30 seconds on each side. Keep them wrapped in aluminum foil or a damp towel until ready to eat. Extras store nicely in the freezer.

Posted by Sheree Welshimer at 7:23 PM