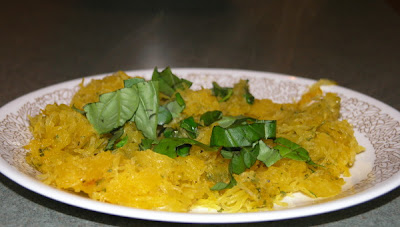 There's nothing like a snowy day to make me start craving hot chocolate, brownies and other assorted carbs but instead I'm munching on spaghetti squash. It's been snowing all day here, and carbs have been calling my name.

But I must ignore them because I am still battling candida. I've come a long way in six months but every time I start thinking I can have a few extra carbs, my symptoms start returning.

I also thought I could indulge in a little caffeine but then, I don't know how to indulge just a little. Once I opened the caffeine door, I just wanted some every day. Candida definitely thrives on caffeine. At least, so it seems based on what happens to me every time I get started drinking hot drinks with caffeine.

Anyhow, a plate of spahetti squash seemed like a sort of compromise today: some carbs, but not too much. I have a plentiful supply of spaghetti squash that I grew in my garden this summer. I have been holding off eating them because they fall into the winter squash category which should be added sparingly to your anti-candida diet. I also have basil growing indoors in my AeroGrow, a spacesaver hydroponic garden. Here's the recipe.

Preheat the oven to 375 degrees. Cut the spaghetti squash in half lengthwise. Place cut side down in a baking dish. Add some water to the bottom of the pan and cover the pan with aluminum foil. Bake for 45 minutes or until the squash is tender.

Remove the squash from the oven, uncover and allow to cool slightly. Use a spoon to remove the seeds. Use a fork to pull out the squash strands and place in a bowl.

Heat the olive oil in a skillet. Add the squash, herbs, salt and pepper. Toss and heat. Serve as a side dish.

Posted by Sheree Welshimer at 2:12 PM