Five weeks later we are getting to know our air conditioner repairmen like family because they visit us so often. We invested in a new system that turned out to be defective from the manufacturer. Then, to top it all off, I got dive bombed in the back of my head by a territorial hawk.The hawk hit with such force I got whiplash and a slight concussion.

I was trying to find the silver lining in this cloud.
Then, I realized how fortunate I am to have a nice pair of hawks living in my backyard (not related to the divebomber). They are a beautiful site to see and hear every morning. And they don't dive bomb anyone.

I have tried numerous healing diets thinking that I had to follow them exactly as written or I wouldn't get the good results I sought. I have found that healing diets (such as paleo, paleo autoimmune protocol, specific carbohydrate, etc) all need tweaking to suit the individual because there is no one way to eat that is perfect for everyone. After all, we humans are 99.9 percent similar but that 1/10th of one percent makes a huge difference.

I call my diet a modified paleo diet, most of the time.Why did I pick the paleo diet? The paleo diet focuses on whole foods and has a good track record for helping to reverse auto-immune symptoms. In a nutshell, the diet includes plenty of meat, seafood, vegetables, fruit and nuts, and avoidance of toxic foods like sugar, processed foods and hard to digest foods like legumes, dairy and grains.

For me and others with fibro, some problems would immediately emerge if this diet were followed exactly as written. Most individuals with fibro have bacterial infections in their guts like candida and small intestinal bacterial overgrowth (SIBO) and resulting IBS symptoms.

We can't or shouldn't eat much fruit and hardly any nuts/seeds because of digestion problems. Starchy vegetables also are a problem because they also are hard to digest. We want to eat foods that digest easily and don't stick around and cause more bacterial overgrowth problems.

That's where "gray-area" foods come into the picture. Contrary to the paleo diet, I incorporate safe starches like white rice and certain types of potatoes in small amounts. Rice actually has existed for 130 million years (127 million years before humans). Wild rice also was eaten by paleo people.

Jasmine rice is a good rice for people with SIBO like myself and others with fibro because it digests quickly and prohibits bacterial overgrowth. I always serve it as part of a nutrient-packed meal.


Another "gray-area" food is dairy. The major problem with dairy for most people is lactose because many folks lack the digestive enzyme, lactase. Only 40 percent of humans keep this enzyme past childhood largely because of ancestry. But why give up dairy if you can keep the benefits without the problems? Dairy is an excellent source of calcium and Vitamins A, D and K2, the later which are difficult to find in other foods. Serve lactose-free dairy in the form of ghee, cheese, yogurt and kefir.


I incorporate dairy in my modified paleo. I use lots of homemade yogurt, kefir and farmer's cheese. I used some of these ingredients in these Chocolate Modified Paleo Pancakes.
Here's what you need for 3 large pancakes or four small:

Mix the first seven ingredients in a small bowl. Sprinkle the gelatin on top and allow to absorb.  In the meantime, heat your oven to 400 degrees if doing the oven route. The crepes take about 12 minutes to bake. For the skillet method, melt about 1 T. of coconut oil in the pan before cooking each crepe. 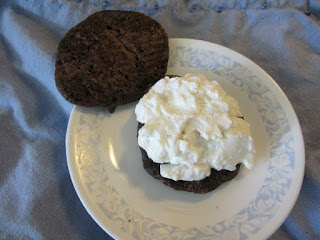 Fill the crepes with "ice cream"or yogurt or whatever you want. I make frozen yogurt by semi-freezing some of my homemade lactose-free yogurt. Or sometimes I pop it into the ice cream freezer.

Top with homemade chocolate sauce made by mixing 2 T. of cocoa powder in 1/4 cup melted coconut oil. Add a pinch of sea salt and stevia and vanilla.


Posted by Sheree Welshimer at 4:39 PM

Having Problems STICKING with your Paleo Diet?

Want to munch on healthy tasty recipes as soon as TONIGHT?

The meaning of this is that you actually get rid of fat by consuming coconut fats (including coconut milk, coconut cream and coconut oil).

These 3 studies from big medicinal journals are sure to turn the traditional nutrition world upside down!