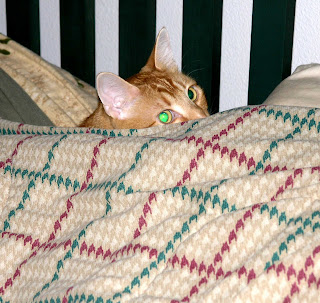 Early in my journey to unravel how to deal with IBS/food allergies I avoided foods, such as vegetables, that were difficult to digest. That was hard because I love vegetables but the foods that had previously been my friends seemed to create digestive issues for me. I ended up sick in bed, sort of like Pumpkin in photo above. Now I've learned how to make veggies my friends again. In fact, veggies cover at least half or more of my plate at meal times.
It's all in careful selection of veggies and how you prepare them. Vegetables, improperly prepared, can trigger IBS attacks. You can slice, dice, chop or eat them whole but peel them and cook them. They don't have to be mushy but they should be cooked beyond tender crisp. Don't eat them raw. That's asking for trouble.
Certain veggies that are higher in insoluble fiber than others can't be tamed for the IBS tummy no matter how you prepare them. Most can be made tender and delicious by roasting but I haven't had much success with fennel and celery root to name a few.
Since eating enough veggies often is of concern for IBS sufferers, why not kill two birds with one stone. Get your sweet fix and your veggies with Chocolate (Veggie) Brownies. Many IBS sufferers can tolerate chocolate in small doses as long as they eat it with a hearty dose of soluble fiber. Use dark chocolate or allergen-free chocolate to avoid dairy which can trigger IBS attacks. Remember to exercise self-control and limit yourself to just one (moderately sized, of course) because over-indulgence is the source of many an IBS attack. 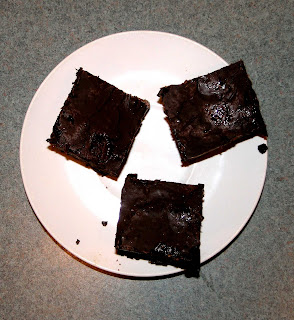 Preheat oven to 350 degrees. Lightly spray an 8-inch square baking pan. In a blend or food processor, blend together the spinach and zucchini to a smooth puree. Add the agave, maple syrup, oil, flax, coffee, apple cider vinegar, milk, egg replacer or egg whites, and vanilla, and blend to combine. Set aside while you measure the dry ingredients.
In a large bowl, sift together the flours, cocoa, baking soda, and salt. Pour the wet ingredients over the dry and whisk together to combine. If this batter is too stiff, add a tablespoon or two more of rice or soy milk. Add in 2/3's or all of the chocolate chips. I reserved about a third to melt and spread on the top of the finished brownies.
Pour or scoop the batter into the prepared baking pan. Bake for 20-25 minutes, or until the brownies are firm to the touch and a wooden toothpick inserted into the center comes out clean. Sprinkle the the top with extra chocolate chips. Allow to melt and then spread over the top with a knife. An alternative topping would be a dusting of extra cocoa powder and cinnamon.
Allow the brownies to cool completely before cutting. You should get about 12 brownies. After cutting the brownies, wrap them individually for freezing. That way you won't be tempted to over-indulge.

Posted by Sheree Welshimer at 7:21 PM