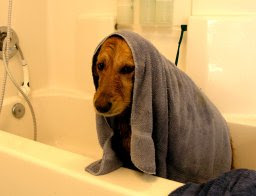 Many people with stomach issues/IBS have their symptoms come and go, sometimes disappearing for months at a time. Unfortunately, I am not one of those people. I have nicknamed myself "the stomach" because that part of me influences almost everything in my daily life. I am one of those people who changes in lifestyle, eating, lowering of stress, etc. has made some, but not significant, impact on improving their condition. Where do I go from here? Well, I don't give up. Without hope, I am sunk for sure. This condition can be depressing enough as it is. (Sometimes I feel as disheartened as my friend Kona, above, appears while getting a bath.) But my belief is there has to be something that's screwing with me that no one has discovered yet.


Recently, I read about a British medical study where they took a group of 120 individuals who had been suffering with IBS for years, in some cases decades. Everything these individuals had done to improve their situation had done little. These individuals were tested for intestinal parasites and yeast, something else as well, but I don't remember. Most of these individuals had traveled or lived in other countries but a few had not. All of their tests came back positive for one or more of the three. When these conditions were addressed, their symptoms were reduced markedly.


After reading about the study, I decided to have the test done. I lived overseas and worked around livestock for quite awhile so it was a possibility. Also, my doctor had mentioned it a few months earlier, but wanted me to try other things first. Well, I am waiting for the results. Hopefully, I will be on to something that will improve my condition. In the meantime, I am enjoying my favorite breakfast for when I'm feeling a little down. You guessed it. It has chocolate in it. 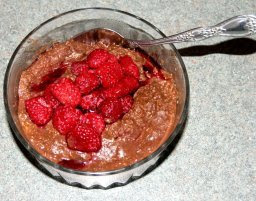 This cereal is so simple to prepare. It tastes like a dessert for breakfast but yet no sugar is added.

Put all ingredients, except raspberries, in a saucepan. Cover with a lid and heat to boiling. Reduce heat to simmer and cook for 7-8 minutes. Scoop cereal into a bowl and top with raspberries. Enjoy!
Posted by Sheree Welshimer at 8:27 AM