Backpacking involves hiking to a mountainous destination, such as a lake, with all your gear loaded into a backpack. It’s an activity that can be challenging for anyone but add in multiple food sensitivities, fibromyalgia, candida and stomach issues.


Despite these health problems, my interest in backpacking was rekindled two summers ago, after giving it up for more than a decade. Read about my first outing here: http://catsinthekitchen.blogspot.com/2012/06/chocolate-fix-backpacking-bars.html and  http://catsinthekitchen.blogspot.com/2011/08/backpacking-with-candida-and-food.html
I guess it proves that you don’t have to let food allergies keep you from doing the things you enjoy.

Two weeks ago, my son, Brian, and I did a nine-mile day hike into Jenny Lake near Idaho City. There still was snow to traverse to get to the lake but it was worth the effort.

I packed in some fresh food, Orange Julius Kale Salad, http://catsinthekitchen.blogspot.com/2013/06/orange-julius-kale-salad.html, and sat by the lake enjoying this breathtaking view while I enjoyed my lunch.

Fur pups, Misha and Nika, loved the snow and the hike with their human pals.


Do you think Nika, a furry malamute, was enjoying her patch of June snow?
Now, the fun begins to get ready for a three-day backpacking adventure (sixth in the last three summers). My first backpacking trip with food allergies took a lot of planning. Yes, planning is the key to doing something with food allergies or any health problem.

I still do a little fuming that I have to do much preparation while my backpacking partners (husband and son) simply pick up a few pre-packaged meals, ready to rehydrate by adding hot water. Their backpacking menu will include freeze-dried eggs and bacon, beef stroganoff and chicken enchiladas.


Items, such as these, are loaded with many of the foods, starches and additives that I need to avoid. This year my preparation is complicated by the fact that I have developed a few new food sensitivities, a complication of fibromyalgia.


I began my search to find suitable foods several months prior to our planned trip. I looked on the internet for the freeze-dried foods I can tolerate. The second step involved assembling these foods into safe meals and placing them in heavy-duty storage bags for packing. I also bake my own packable energy bars, muffins, crackers with safe ingredients.


I ended up ordering items from the same companies I have dealt with in the past. They include: http://www.nutsonline.com  and http://beprepared.com. I purchased carrots, broccoli, chicken, strawberries, blueberries, apples, peaches, butternut squash, zucchini and spinach. I can make a variety of meals and snacks from these ingredients plus a few items from the pantry. 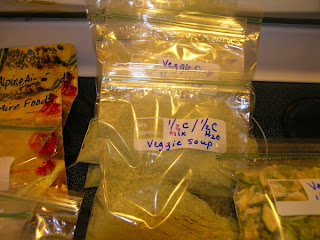 Here’s a recipe for delicious Raw Lemon Blueberry Energy Bites that can be eaten at home or taken along backpacking or camping. Note: I'm hoping they are packable. If not, they can be eaten with a spoon and they'll still be tasty!

Grind your sunflower seeds into flour in a coffee grinder or NutriBullet. Place all ingredients (except freeze-dried blueberries) in a food processor and blend into dough forms. Toss in blueberries and pulse a few more times to mix in. Shape the dough into balls and store in fridge or pack in containers to hit the trail!

Posted by Sheree Welshimer at 10:32 AM

Wow! These sound so delicious! It's making me regret packing my food processor so soon!! Can't wait to try these! I love how you make your own sunflower seed flour first. Thanks for sharing them at Raw Foods Thursdays.

Thanks for linking-up to 5-Ingredient Mondays! Your recipe looks delicious. I love dried blueberries and basically any recipe containing them :) Hope to see you back this week!

Thank you! They actually held up well backpacking/hiking. My only problem was trying to make them last through the trip since I wanted to eat them!

This is really great. I like to be visiting your blog. Thanks very much for sharing all this great information here.

The meaning of this is that you actually kill fat by eating Coconut Fats (in addition to coconut milk, coconut cream and coconut oil).

These 3 researches from large medical magazines are sure to turn the conventional nutrition world upside down!