Backpacking, Cooking and Dogs---that will be the new name of my blog if I ever decide to change. I feel so fortunate that I've been able to go on many backpacking adventures this summer. I guess you could say I've come a long way, physically, since I re-adopted the anti-candida diet last October.

That doesn't mean I don't have my issues. I follow a rigid diet and sometimes must walk a bit of a tightrope with certain foods. Some foods must be only eaten every 3-5 days. I guess you could say I still am plagued with shifting food sensitivities. I have heard that goes along with some auto immune disorders.

I've had a great gardening summer this year. My garden is filled with the many foods I can eat, like Swiss chard, kale, and golden and red beets. I used up a lot of those veggies in an entrée I cooked while I was stove-less for 15 days. (I should write a cookbook---Stove-less in Seattle. You know a play on Sleepless in Seattle.)
﻿ 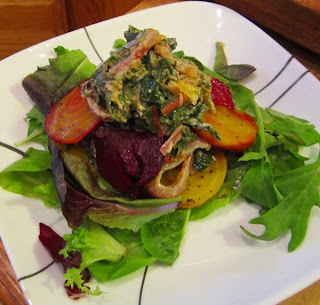 It's a super simple entrée to make. You know it had to be if I made it without a stove. (Hot plates rock when you have no stove. Not.) 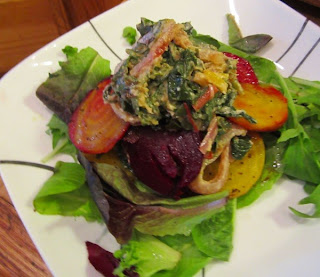 Peel and slice the beets. Steam until tender. (Hint: save the beet water. It makes a great energy drink with a little stevia added.) Set aside.

Wash and trim your greens. Thinly slice the onion. Fire up the hot plate. (Okay, you can skip that one and use your stove.) Heat olive oil in a large sauté pan. Sauté the onions and greens until tender. Season with salt and pepper. Spoon in the sunbutter and stir until combined with the greens.

To serve, arrange the beets in a flat layer (hence, the flatbread comparison) on a bed of mixed lettuce greens, if desired. Spoon the sunbuttery Swiss Chard on top.

It's quick to make but oh, so delicious!

I've been enjoying all of your submissions to 5-Ingredient Mondays. I've nominated you for the Versatile Blogger Award! If you’d like to accept please see this post.

Thank you for nominating me! It means a lot!