It's Day 19 of the paleo autoimmune protocol (AIP), an elimination diet to help individuals with autoimmune diseases detect hidden food sensitivities that may be contributing to symptoms. I'm almost two-thirds through the 30 days. 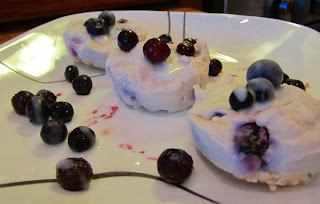 This diet restricts many foods, including grains, seeds/nuts or butters,dairy and eggs, that are frequently used in desserts. What do I turn to for an occasional treat? Berries (especially blueberries), coconut in all forms (flakes, coconut milk, coconut oil, coconut butter and coconut flour), avocadoes, pears and stevia. I know it's not a long list but you can come up with some tasty treats. It doesn't hurt to get an inspiration from someone else as I did with my Blueberry Coconut Cups at
http://detachedandconnected.tumblr.com/post/64889167720/blueberry-studded-coconut-crunch-cups 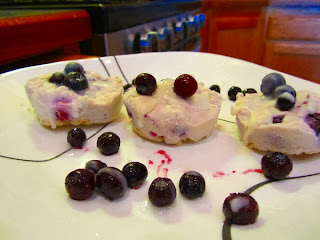 The original recipe contained nuts, which are off limits. I subbed lots of coconut.

Here's what you need for 6 cups: 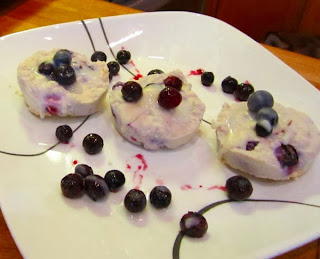 Here's what you do:
In a medium bowl, mix the crust ingredients. The coconut butter and coconut oil will need to be softened. Press the crust into the bottoms of a six cupcake cells. Stick the pan in the fridge or freezer to harden the crust.

Make the filling by putting all your ingredients, except blueberries, in a food processor. Blend until smooth.
Now, stir in the blueberries. Divide the filling evenly among the cupcake section. Allow the cupcake cups to firm up for several hours in the fridge. If frozen, the coconut cups will need to be taken out early to thaw out a bit. Garnish with additional blueberries and softened coconut butter for an amazing dessert!

Yes, those caught my eye too! (And apparently your kitty's!) Don't you love getting inspiration from other bloggers? Thanks for sharing your version at Raw Foods Thursdays!

Absolutely, there are so many great ideas out there! And, sometimes, we need some inspiration, especially when we are limited on ingredients.

These look so good!! I'm on an elimination diet to help my son with his spitup problem (I think he's sensitive to dairy but I'm getting rid of everything and then re-adding things back in and monitoring reactions), and I cannot have pretty much anything but most fruit, most veggies, potatoes, rice, and certain types of meat (lamb, fish, turkey). I'm giving these a shot! I love how versatile the coconut is, haha!

The meaning of this is that you literally burn fat by eating coconut fats (in addition to coconut milk, coconut cream and coconut oil).

These 3 studies from large medical magazines are sure to turn the traditional nutrition world around!