Backpacking is one of my favorite late spring, summer and early fall activities. But in late fall, I prefer day hiking. You get to enjoy all the scenery, even snow on the ground, but avoid sleeping in a tent in frigid temperatures.

On a recent hiking/kayaking trip, I packed along raw cinnabon bites, free of grains, nuts/seeds, and in compliance with the paleo autoimmune protocol (AIP). I have reached day 16 of this 30-day elimination diet for individuals with autoimmune disease.

Soften 2 T. each coconut butter and oil. Place in a food processor, along with coconut flour, cinnamon, salt, vanilla extract, stevia and coconut milk. Pulse to mix into a sturdy dough. Shape into 6 balls. Place in the fridge to firm up. 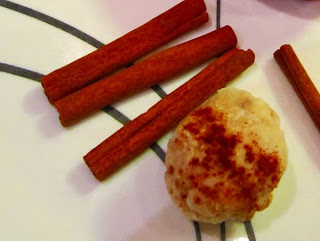 Once the cinnabons are firm, dip them in a glaze, made from 1 T. each softened coconut oil and coconut butter. Return the cinnabon bites to the fridge until glaze firms up. 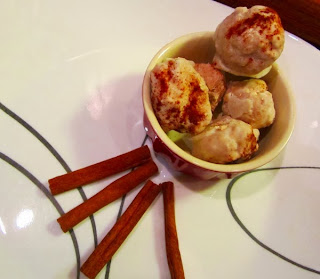 Eat the cinnabon bites as they are or use to garnish a pumpkin spice smoothie, as pictured below. 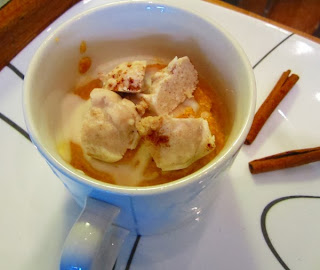 Get the recipe for the paleo pumpkin smoothie at http://www.tessadomesticdiva.com

Visiting from Ricki's ... these treats look absolutely incredible! I will definitely be making them. :-) Love your beautiful photos of your outdoor activities, too!

Thank you for visiting my blog. Yes, I love them too! They are actually quite filling, probably because of the coconut flour. They are great when you want a little treat that contains healthy ingredients. They are definitely my favorite treat while on the paleo autoimmune protocol diet.


BTW, I’d like to invite you to “Like” my new Facebook fan page for The Gluten Free Homestead. https://www.facebook.com/TheGlutenFreeHomestead
I’d be extremely blessed by your participation and promotion of joyful gluten free living.

Have a great weekend.

Thank you, Barbara. I give it a look.

I am eagerly waiting for raw cinnabon bites, free of grains, nuts/seeds mixture and combination of oconut flour, cinnamon, salt, vanilla extract, stevia and coconut milk. I am gathering dessert recipe tips and this is amongst superior class.

I am happy you found my recipe. Let me know how it turns out.

Oh my gosh, these sound great! I'm such a fan of coconut butter, and love making my own at home. I made some coconut balls similar to this last year and haven't since. Thanks for reminding me how much I need them in my life! Love your blog!

They are delicious! I keep making them and always seem to have some in the freezer in case I want a treat. You made my day by telling me you like my blog!

Thanks for linking up at the Paleo AIP Recipe Roundtable. These look yummy! I hope you'll join us again this week: http://www.phoenixhelix.com/2013/11/06/paleo-aip-recipe-roundtable-2/

I appreciate you hosting this roundtable for those of us following the paleo autoimmune protocol.

I just made these and they are sooo good! I actually used them with one of my favorite desserts - "baked" apple. I cored the apple, filled the center with raisins and some vanilla, then microwaved it till it was soft. When it was done, I drizzled the leftover glaze from these babies on it, cut it open into slices, then crumbled a few of these on top. SO good. And the glaze mixed with the juice from the apple; I know there is some sort of dessert begging to be made from apple juice and this glaze! Maybe a pie filling if you add some gelatin and apple slices? Anyway, DELICIOUS and thank you for your recipes SO much!!

The meaning of this is that you literally kill fat by consuming Coconut Fat (in addition to coconut milk, coconut cream and coconut oil).

These 3 studies from large medicinal journals are sure to turn the traditional nutrition world around!

The principle effectiveness of a residential look that can assist you always keep, ready yourself as well as cause portions diet regime as well as in order to perform like undertakings as with dishwashing.frigidaire dehumidifier troubleshooting