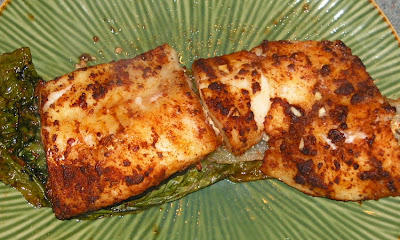 Fish is such a great food for someone with stomach issues because it's so easily digested. Of course, that's assuming it's not breaded and fried which will undo it's healthiness and digestibility. I probably eat fish three or four times a week so I'm always on the lookout for a new way to prepare it. On a recent trip to Seattle, I discovered a delicious way to prepare fish in a Cuban/Spanish fusion restaurant. Pescado de Tito was cod, seasoned with a blend of cinnamon, paprika, garlic, onions and white wine. The cod was wonderfully moist. The secret was placing the fish on banana leaves before grilling.
When I returned home, I tried my own version which also turned out quite moist even though I had to substitute lettuce leaves for the banana leaves. The recipe also gave me the opportunity to try out "true" cinnamon my daughter purchased for me from a spice shop in Seattle.
Spanish Cod on Lettuce Leaves
Ingredients for 2 servings:

Prepare the spice blend by measuring ingredients into a jar with a lid. Shake to mix. Spray a grill pan or prepare your barbecue. Rinse the cod fillets and pat dry. Rub the cod fillets on both sides with cinnamon-paprika spice blend. Divide the onions and garlic evenly between the 2 lettuce leaves. Place the fish on top of the onion-garlic mixture on the lettuce leaves. Drizzle with olive oil and white wine. Grill the fish on their lettuce leaves (about 10 minutes). The fish is done when it flakes.

Serve the Spanish cod with steamed rice (white or brown) and roasted veggies such as zucchini, yellow squash, broccoli or asparagus. Consider a tossed baby green salad with hearts of palm drizzled with a light balsalmic dressing if your stomach can tolerate it.

Posted by Sheree Welshimer at 2:08 PM