Imagine Ritalin Dog (my husky Misha) without his wrestling buddy (my malamute Nika sidelined by surgery and unable to help tire him out). Are you picturing Misha bouncing off the walls, chasing Bailey (the cat) mercilessly and becoming more mischievous by the minute?

Then imagine being the poor hapless smuck of a stink bug who stumbled into our "Animal House." If stink bug's could curse, I think this one would have said, "Oh, @#$?! Why me?"


You'd think getting a sniff of a stink bug's disagreeable odor would have been enough to deter Misha. Ritalin Dog was temporarily discouraged but never underestimate a husky's insatiable curiosity. The stink bug provided an hour's worth of "entertainment" for Misha, occasionally assisted by Nika (on pain meds) and Bailey.

Nika had to wear the dreaded ProCollar last week after being spayed. I would never downplay Nika's discomfort from her surgery but she can be a bit of a drama queen. I lost count of how many times I heard my hubby (wrapped around Nika's big paw) say, "Oh sweetie, are you okay?" Okay, I'll admit I worried too because she vocalized every ache and pain.

I used to reach for peanut butter when I was having a stressful week, like last week. Now, I reach for sunbutter because of food sensitivities. I love using sunbutter to make a mock "Pad Thai" sauce to serve on zucchini ribbons. This time, I thought why not serve the sauce on spaghetti squash noodles.

Winter has never been my favorite season. I decided to make it more enjoyable by trying something new this winter. I rented a yurt operated by Idaho Parks and Recreation, for an overnight stay. The yurt adventure was a hit with everyone, including the snow pups, Misha and Nika.

Ritalin Boy (husband) and I used to go winter backpacking, using a pup tent. By comparison, the yurt was like being in the Hilton. It was definitely a step up. We snowshoed in about 2.5 miles with our gear in either backpacks or sleds or in the case of Ritalin Boy, both. This was not without mishaps. Ritalin Boy purchased a $3 sled to pull and it kept flipping over whenever we hit a sloped section of trail. I guess you get what you pay for when it comes to gear.

Snow buddies, Misha and Nika, were in the height of their glory. I think they wanted us to stay at the yurt indefinitely or at least, until the snow disappeared.


The most unique part about the yurt was the open privy. There was a great view of the clear night sky if you had any business to conduct there late at night. The trail down there was a bit treacherous because of icy conditions. The overnight temperature was 5 degrees so you really needed to go to make the trip.


The yurt was well equipped with comfortable furnishings, wood stove, propane lanterns and cook stove. Nika, my food crazy malamute, wanted everyone's food for herself but alas, she had to deal with disappointment that some of the food we hauled in was for us. Misha did the honors of hauling in the pups' food.

We enjoyed our yurt stay so much we plan to repeat the experience in March. In the meantime, I am trying to decide if we should just take backpacking food again or try something more gourmet. The kitchen was well equipped with everything needed to do some more adventurous cooking.

My idea of packing along some sweet potato and granny smith apple slices, and diced butternut squash for snacking, really hit the spot. Dipping the snacks in sunbutter made the perfect combination.

Posted by Sheree Welshimer at 10:14 AM 2 comments:


Do you sometimes think animals have things figured out better than people? Misha, Nika, Kona and Bailey, my pets, offer me a lesson in this every day.

Valentine's Day is an opportunity for people to treat others in a special way. Amazingly, my canine and feline members of the household do this everyday.

Misha and Nika are polar opposites when it comes to eating. If the Dyson Animal Vacuum makers had a prototype, it was Nika. She vacuums up everything in sight leaving no morsels behind.

Misha, on the other hand, is like no dog I've ever had. We call him Ridalin Dog because he is hyper (synonymous with the Husky breed) but he's an "I'll eat when the mood strikes me" kind of guy. If he were a person, he'd need his cup of joe to get him started in the morning and the sight of breakfast would turn his stomach. Sometimes it takes him two hours to wake enough to eat breakfast while the other pets polished their's off right away.

These two different styles could create issues. But animals have a way of working things out. Nika, Kona and Bailey politely wait nearby which provides the subtle encouragement Misha needs to finish up his chow. Seriously, there could be blood shed as much as Nika loves food but it's never happened.
They've just adapted to each other's differences, needs and wants.
Bailey, a dimutive eight pounds of cat, is tiny when compared to the 160 pounds combined weight of our three pooches.The dogs could easily tear Bailey to pieces but he gets away with things you'd never imagine could happen. Recently, I unsuccessfully attempted to photograph Bailey chewing on Ridalin Dog's ears. Bailey was doing this chewing while perched on top of the napping Husky. In the photo above, Bailey messes with his canine pals's minds by playing hide and seek. A slightly ajar closet door provided the perfect place for him to hide.
My animal buddies are kind of Valentine's Day gifts that keep on giving. They give me lots of love. I wouldn't trade them for anything but that doesn't mean chocolate isn't still welcome for Valentine's Day.

I found the most amazing recipe for raw chocolate brownies on www.wayfaringchocolate.com
and I started drooling, almost as badly as Nika does over food. I had to adapt the recipe to make it allergen and ACD-friendly for me but it worked. The result was luscious, decadent and okay for me to eat (in moderation). I used a heart-shaped cookie cutter to shape the brownies into hearts.

Your sweetie pie will love these brownies. I like them served somewhat frozen.


You can probably guess Nika who drools at the thought of food was right by my side while whipping up these brownies. I think it wore her out waiting for something to be dropped. She fell asleep after all the clean up. She even used the kitchen dumbbell for a pillow. (We had to put heavy items in strategic places to keep her and the others from burrowing under the kitchen counters in search of who knows what).


Posted by Sheree Welshimer at 2:23 PM No comments:


Can you believe the attentiveness of my two helpers in the kitchen? I used to teach elementary school and had to pull out all my bag of tricks to get this kind of attentiveness. Now, I head to the kitchen and my canine assistants will jump through hoops just for a piece of kale.
Yes, they love veggies but only kale will make them dance for joy. These dogs do love to dance. I'm wondering if I should take up ballroom dancing with my canines. Yes, there really is such a thing. You and your doggie partner get dressed to the nines and go out for a night of dancing on the town. 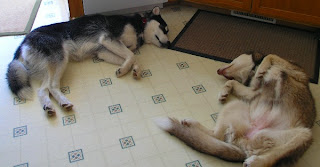 Here are my two helpers after they've lost hope of any food being dropped. Can you say canine kitchen obstacle course?

I was on a chocolate and raspberry kick for at least two weeks but finally have gotten my fill. My newest food passion is a combo of butternut squash, pear and sunbutter. This yummy combination, rich in nutrition, can be used in smoothies, soups, collard wraps and even ice cream.


I love following my morning workout with one of these babies for breakfast: Butternut Squash-Pear Smoothie topped with toasted pumpkin seeds and a dab of sunbutter. 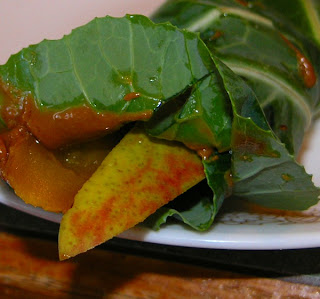 Fastforward to mid-afternoon and I'm looking for the ingredients to make a Butternut Squash-Pear-Sunbutter collard wrap.

Posted by Sheree Welshimer at 11:29 AM No comments: