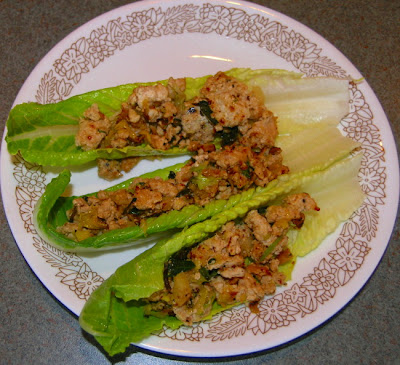 I can't believe I'm eating letuce leaves like the ones pictured above. If I hadn't gone on the candida cleanse diet, this miracle would never have happened. You see I've been unable to eat raw veggies and other more difficult to digest foods for five years+ without serious digestive consequences. I've been so "abnormal" in terms of what I eat for so long, it's difficult for me accept this change. I keep waiting for some awful digestive problems to occur.

I thought if this ever happened that I would be instantly overjoyed but instead I find myself confused and not believing it's really happening. I am hesitant to eat stuff I couldn't eat before, such as raw foods. But I am venturing into this area cautiously. Psychologically, I am having difficulty accepting that I am beginning to feel well for the first time in months or even years. I am so used to being "sick," it has become part of my personna. I keep waiting for this more healthy me to end. I've gotten my hopes up so many times in the past. I know over time, I will accept the new me.

It's been three weeks since I started the candida cleanse where I eat mainly veggies and light protein, and eliminate carbs to starve out the overgrowth of yeast that has been spawning various health problems, including stomach and sinus issues. I'm getting to the point where I should start reintroducing a few carbs, such as whole grains and fruit. But I am reluctant fearing some dire consequences, like reverting back to being so sick. I plan to start gradually and monitor any increase in my symptoms. I know the whole healing process (physical and mental) is going to take time.

Here's the recipe for the Spicy Turkey on Lettuce Leaves
Ingredients:
1 pound lean ground turkey
large lettuce leaves, such as romaine
1-2 grated zucchinis
smidge of red pepper flakes
2 cloves minced garlic
1 inch of peeled, minced ginger root
salt and pepper to taste
1/2 cup chopped, fresh mint leaves
canola oil
Directions:
In a large skillet, heat some oil. Add the garlic, ginger and red pepper flakes and cook until slightly soft. Add the ground turkey and salt and pepper. Cook the turkey until browned and then add the grated zucchini. Cook until heated through. Turn off the heat and toss in the mint leaves. Spoon onto large lettuce leaves to serve.
Posted by Sheree Welshimer at 10:01 AM