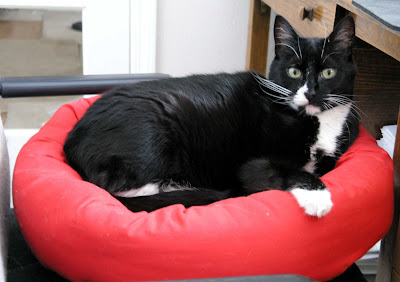 My pal and cat in the kitchen, Oreo, died last week. I'm sitting here in my home office missing her because she was always in here with me. She was as much a fixture in the office as she was in the kitchen. She put up a good fight and despite her bad tummy and other health issues made it to the age of 13. My home and kitchen just won't be the same without her.

It's a good thing I have been doing my positive affirmations daily and listening to a tape that encourages positive thinking because I really needed that to help me through last week. The day I had her put to sleep was an emotional day. I could feel the effects on my sinuses and stomach as well as tension throughout my body. It definitely illustrated for me how emotional stress plays a role in our health. I must admit on that particular day I was uttering my positive affirmations constantly.

I'm coming to believe that many of my health problems have been related to an overgrowth of candida (fungus) as well as negative thinking brought on by unresolved, chronic illness. Of course, it's easier to be more positive when you're starting to feel better as I am. However, for a long time, I kept telling myself that I had to remain a skeptic because this might not work either. But I'm finally getting where I'm a believer that candida was definitely playing a significant role in my health issues. But just to be sure I keep getting better, I'm staying on the low-carb diet and uttering my affirmations as much as it takes. 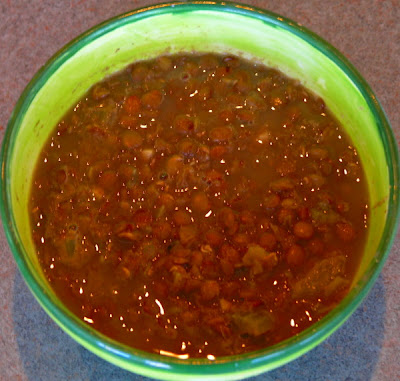 Ingredients:
2 1/2 cups dried lentils
4-5 garlic cloves, finely chopped
2 T. olive oil
1 T. ground coriander
1 1/2 tsp. ground cumin
2 large cinnamon sticks
1/2 tsp. ground cardamon
1/8 tsp. ground cloves
1 tsp. ground ginger
1/2 tsp. white pepper
8 cups veggie broth or chicken broth (with no sugar added)
1 1/2 tsp. salt
Directions:
Soak lentils in cold water for one hour. Saute garlic in olive oil in a large pot. Stir in spices. Next, add in the lentils and broth and bring to a boil. Reduce heat and simmer about one hour or longer. Add the salt and remove the cinnamon sticks. Puree about half the mixture and return to the pot.
This lentil soup almost tastes like chai tea with all of its wonderful spices. It's a great recipe to make if you want a lot of soup to eat for breakfast, lunch, dinner or snacks. I found it tasty for breakfast.
Posted by Sheree Welshimer at 7:05 PM

I'm so sorry for your loss =(. you have to stay positive in these situations...stress does have a tremendous amount of impact on our bodies. Overcoming it is the challenge. I hope all as well for you.

Thank you so much for your encouragement. I miss my Miss Oreo but fortunately I have an orange fireball, named Pumpkin, to love.

I agree lentil soup is awesome. I never was able to eat it before discovering my candida problem.