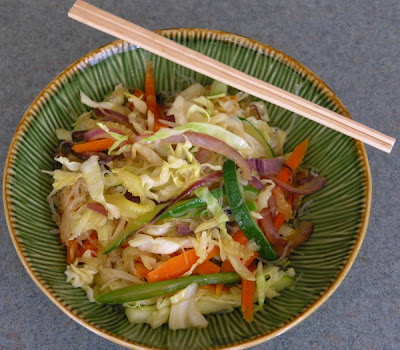 Staying on an anti-candida diet (ACD) while traveling is not easy. There are too many tempting foods out there when you are away from home. It's especially difficult when you are on a bicycle tour in British Columbia where you've left not only home but your car far away.

Biking 60-70 miles a day up and over numerous hills (some with seven to eight percent grades) creates an enormous drain on your glycogen reserves. I wanted to feast on carbohydrates of all kinds but yet was determined to stay on a low-glycemic diet. This was especially difficult when watching my husband (who pursues a diet at the extreme opposite of ACD) eat every carb in sight, including brownies, cookies, ice cream. You name it. He ate it.

I did learn a lot about how to get ACD foods even while traveling and eating out frequently. My first lesson was that a salad in a restaurant is light-years away from a salad made at home. Apparently, few people order salads in restaurants and if they do, they don't want a man-sized salad. The result is you are lucky to get one cup of greens and a sprinkling of a few token veggies on top when ordering a salad. This was true not only in the U.S.-portion of our trip but also in British Columbia.

These puny "salads" also fetched a substantial price. Most of the salads I ordered were $8-$12 for next to nothing in the way of ingredients (usually chicken, greens, a few veggies). One time we even ate in a vegan/vegetarian restaurant and my salad was still itsy-bitsy. I remember when you actually could make a meal out of a salad. My husband on the other hand got enough to feed two or three people in the form of burgers, fries, potato salad, cole slaw, Philly cheesesteak, desserts, rolls (not all at the same meal but a lot) for less than what I paid.

After going away from a few restaurants still famished, I finally got sauvy on how to order. I would ask to trade all the sides that came with a piece of chicken or salmon for a giant bucket of salad, served with olive oil and lemon. It worked. I actually got pretty filled up. Sometimes, I was fortunate enough to find an eatery with an all-you-can-eat salad bar that actually had veggies not just mayonaise-laden foods, masquerading as salads.

I shopped in markets along the way to fill in the gaps in my diet not filled by the restaurant offerings which are sadly mostly high in refined carbs and not-so-lean protein. At markets, I would stock up on fresh veggies, low-glycemic fruit (berries), raw sunflower and pumpkin seeds, hummus, garbanzo or pinto beans, and tofu to eat for snacks. I also found frozen brown rice that I could thaw out for breakfast and unsweetened soy milk. I started the trip with a supply of low-carb crackers I made, quinoa, garbanzo bean flour, raw tortillas, liquid stevia, chia seed (I added it to soy milk with liquid stevia to make a treat) and olive oil to supplement my meals here and there.

Most motels we stayed in had a microwave and mini-fridge so that I could cook my breakfast in the room. Two places where we spent the night had a kitchenette. I discovered it is possible to make quinoa and garbanzo-bean flatbread in a microwave. It wasn't half-bad.

I actually stayed pretty well nourished but did find myself hungering for certain foods by the time I returned home. My stomach behaved itself quite well on the trip despite all the fresh veggies I consumed.

Another discovery I made was that for me, it's actually easier to behave myself on a trip than at home. That discovery inspired me to follow my trip diet as much as possible at home which means I would skip sneaking carob-coconut balls and extra helpings of garbanzo bean flatbread. I would focus on eating more raw veggies and vegetarian meals. With that in mind, I cooked up some Seaweed Noodle and Veggie Saute.

Directions:
Use a large skillet to heat the olive oil over medium heat. Add the onion and saute. Add the carrots and zucchini and saute. Add the cabbage and Bragg's and saute until all the veggies are softened. Add the rinsed seaweed noodles and cook to heat. Remove from the heat and toss in the sesame oil. Serve warm with chopsticks for a bit of Asian flare. Makes 2-3 servings.

Posted by Sheree Welshimer at 9:20 AM

eToro is the best forex broker for beginning and advanced traders.