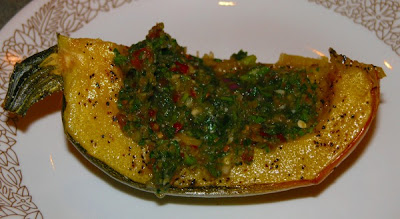 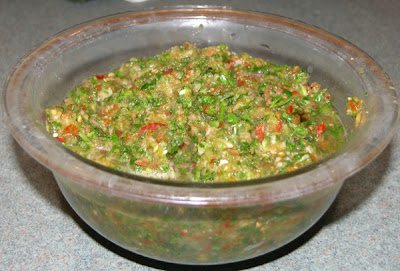 Sorry for the absence of new posts on my blog in awhile. I have a neck and shoulder injury. Until the past few days, time on the computer was a painful experience and had to be limited to 10 minutes or less.
My injury has kept me from experimenting with new recipes in the kitchen but I did try sofrito, a blend of tomatoes, sweet peppers, onions and garlic. It is similar to salsa but less heavy on tomatoes. It's considered a staple of Latin Caribbean food. Sofrito uses up a lot of garden produce and makes a tasty topping for meats and veggies. I used it to top off a spaghetti squash, picked from my garden. Yum!
Sofrito
(Makes one quart)
Ingredients:

Put everything in your food processor and blend until it reaches a puree consistency. Stores well in the fridge for at least a week.

Bake spaghetti squash in the oven at 350 degrees for approximately 30 minutes. Slice the squash in half lengthwise, seed, sprinkle with salt and pepper, and place in a baking pan with 1/2 inch of water. Remove from the oven when fork tender.

Spread a layer of sofrito on top of the squash and enjoy!

Posted by Sheree Welshimer at 9:53 AM