Happy New Year from the now mostly Canines in the Kitchen with an occasional cat.

Can you believe my little baker, Nika, pictured above? In case you were wondering, my kitchen has gone to the dogs.  The situation is only going to get worse as the twosome, Misha (8 months) and Nika (4 months), get bigger and stronger.

Actually, the muffin tin that Nika is removing from the counter is her new dog-food dish. I'm not exaggerating but Nika is a shop-vac when it comes to eating her food. We tried spreading her food all over the floor and she still manages to vaccuum it up without chewing in less than 45 seconds. Taking her food and distributing it in the sections of the muffin tin forces her to slow down just a bit. Now, it takes her two minutes to eat.

Bailey really does love all his canine pals. This picture was taken at night when they all had been sleeping together on the floor with Bailey in the midst of his rather large dog buddies.

Along with shop-vacuuming her food, Nika enjoys "stealing" Ridalin Boy's cup now and then. In this case, it was filled with water when she pilfered it from where he was sitting watching a football game. Instant, game intermission to mop up the mess.

Misha, modeling his new backpack from Santa, looks huge compared to Nika in this Christmas Day photo. Actually, Nika is rapidly closing the weight gap. Misha weighs in at 55 pounds at eight months and Nika is 35 at four months. Do you think she is going to be a bit large? 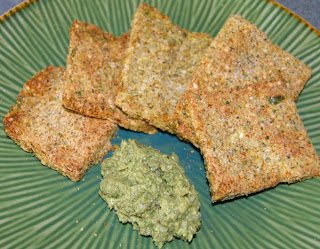 As 2012 approaches, I am still sticking with my low-glycemic diet in an effort to keep sinus problems and candida from returning. Recently, I made these Veggie Seed Crackers and saved some in the freezer for New Year's snacking.