My blender broke down this week, and I actually got panicky. How can I make my smoothies, sauces and all the other stuff I prepare in my blender? Then, I watched this new ABC show, called Time Machine Chefs, where the premise is the chefs have been transported back in time via a time machine that looks like refrigerator.
http://www.slate.com/articles/arts/television/2012/08/time_machine_chefs_on_abc_reviewed_.html

It sounds pretty goofy, right? But actually it was kind of interesting from a historical aspect. Can you imagine being transported back to a Tudor England kitchen where hyperactive terrier-type dogs run in large hamster wheels connected to meat spits? It got me thinking. How about a really big hamster wheel for my malamute, Nika. I know she doesn't look hyper in the photo above but that shot was taken during one of her rare calm moments.

The show has a novel idea as it format but most of the meals being prepared were all about meat. How would a vegan or vegetarian ever fit in back in time?

I started wondering about the history of veganism. Veganism was a term coined in 1944 but the concept of not eating animals can be traced back to ancient Indian and eastern Mediterranean societies. I got this information from a Time article, entitled Veganism. http://www.time.com/time/health/article/0,8599,1854996,00.html

According to the article, "vegetarianism was first mentioned by the Greek philosopher and mathematician Pythagoras of Samos around 500 BCE. Along with his famous Pythagorian triangles, Pythagoras promoted benevolence among all species. Followers of Buddhism, Hinduism, and Jainism also advocated vegetarianism, believing that humans should not inflict pain on other animals.

The meatless lifestyle never really caught on in the West, although it would sometimes pop up during health crazes and religious revivals. The first vegetarian society was formed in 1847 in England. Three years later, Rev. Sylvester Graham, the inventor of Graham crackers, co-founded the American Vegetarian Society.

In November 1944, a British woodworker named Donald Watson announced that because vegetarians ate dairy and eggs, he was going to create a new term called 'vegan,' to describe people who did not. Tuberculosis had been found in 40 percent of Britain's dairy cows the year before, and Watson used this to his advantage, claiming that it proved the vegan lifestyle protected people from tainted food. Three months after coining the term, he issued a formal explanation of the way the word should be pronounced: 'Veegan, not Veejan.'"

I'm sure everyone has a different story of how they became a vegan. I turned to veganism for health reasons.

Somehow out of the blue, Fritos came up as part of a recent dinner conversation. I guess I used to be something of a junkfood junky because I remember loving Fritos. I knew they had a lot of fat but I was amazed to hear my son say you could start a fire with them. Check out this article. http://www.snack-girl.com/snack/fritos-fire-test-video/ Thank goodness, most of the time, Ritalin Boy sticks with popcorn, and sometimes, he shares with pups, Misha and Nika. 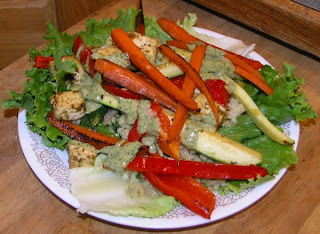 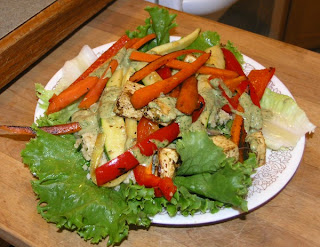 I haven't convinced Ritalin Boy to eat this dish with millet. He prefers Chinese egg noodles which I cannot eat but he loves everything else about this recipe and so do I!

Posted by Sheree Welshimer at 3:11 PM