My guilty food pleasure is coconut butter. (See http://catsinthekitchen.blogspot.com/2013/06/the-liebster-award-and-silly-things.html) Actually, I don't really feel guilty about eating it. After all, what's not good and healthy about it as long as you don't overdo it?

Coconut butter boosts immunity because it contains lauric acid which is an antifungal, antibacterial and antiviral agent. Coconut butter makes a great snack. You can eat it straight from the jar; blend it with seed or nut butter for an easy-to-make candy-like treat: mix it in smoothies; or drizzle it over berries. 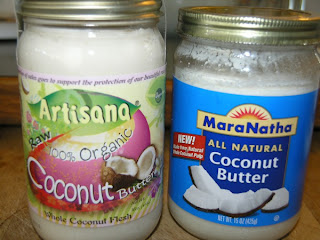 Now, which coconut butter should you buy? I have been a devoted consumer of Artisana Raw Coconut Butter for many years but recently I picked up a jar of MaraNatha All Natural Coconut Butter, a new product.

Okay, I admit I can't stop eating both of these coconut butters. They're delicious but there are some differences.
For a more pourable coconut butter, I prefer MaraNatha but you could achieve the same effect by adding a bit of coconut oil to the Artisana. Which one you buy comes down to how much you want to spend, whether you prefer organic and raw, or like the idea of part of profits going to preserve rainforests. You can make your own but it also can be spendy by the time you add up the cost of your coconut.


Just writing this blog about coconut butter is making me hungry for some! It's a good thing I have some Raw Red Velvet Cupcakes topped with Coconut Butter Frosting in the fridge. I got the idea for these cupcakes from Heather at http://www.glutenfreecat.com Heather made a red velvet cake but it contained nuts which I cannot eat. With a little adapting, my cupcakes were born. 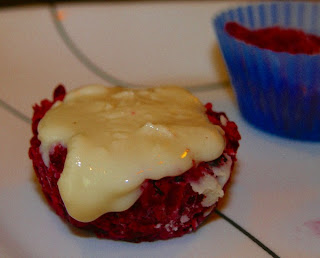 To frost, soften your coconut butter and spoon some on top of each cupcake. Don't forget to lick the spoon!

That last photo is hilarious!

I love coconut butter, too, but never could get used to eating it straight for some reason. . . I use it on scones or muffins, though--seems to work! :) Thanks for linking up to WW this week.

It's probably dangerous that I can eat it straight. But I like it just as well drizzled over berries, sorbet, squash, just about anything. I am a self-confessed addict of this stuff.

Hi Sheree,
LOVE this recipe, of course partly because it includes my beloved SunButter, but also the clever beets and apples. Headed to the kitchen now, thanks again!

You're going to love it, partly because of the SunButter, but also because of the ease of prep! And it tastes like a treat but it's loaded with healthy stuff.

Thanks for linking-up to 5-Ingredient Mondays, Sheree! Your Red Velvet Cupcake is so creative! Hope to see you back this week again :)

Love the snuggling kiddos!! Thanks for sharing this at Raw Foods Thursdays. Such wonderful flavor in beets and carrots! And I've just recently fallen in love with coconut butter, so I can't wait to try this! Pinning this on our RFT board!

The meaning of this is that you literally kill fat by eating Coconut Fat (including coconut milk, coconut cream and coconut oil).

These 3 researches from big medicinal journals are sure to turn the conventional nutrition world upside down!