Anyone want a hug from my 100-pound malamute, Nika?

Maybe you'd also like a nourishing bowl of veggie noodles with a little bit of Asian fusion thrown in.This dish has become my favorite "fast-food" dinner. It's filled with great flavor, easy-to-make and fills the bill for the AIP and FODMAPs diets, which I have been experimenting with in recent weeks. 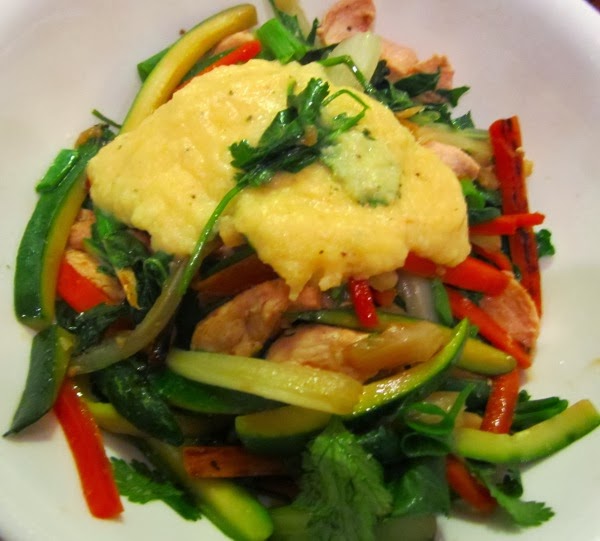 Here's what you need for 2 servings: 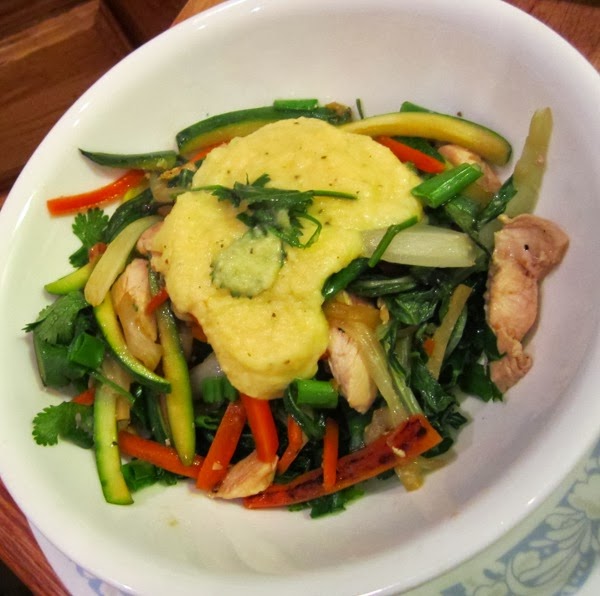 Heat a large skillet with olive oil or coconut oil. Saute chicken (or optional tofu-not allowed for AIP) pieces until cooked. Remove chicken to a bowl and keep warm.

Reheat the skillet. Add more oil, if needed. Steam the kale until tender. Set aside. Next, stir fry the carrot, bok choy, zucchini and ginger until somewhat tender. Add coconut aminos and continue stir-frying until veggies are tender-crisp. Season with salt and pepper to taste. Add the chicken, the green onion pieces and cilantro and cook until heated.

Serve veggie noodles on a bed of kale in a large bowl. Top with more coconut aminos and a dollop of lemon spaghetti squash sauce which, I guess, makes this kind of a fusion meal.

I love the idea of this bowl! And your sauce sounds absolutely scrumptious!

This looks delicious and I bet the lemon sauce is the perfect choice for this bowl.

How are you two doing? I'm sorry I haven't posted on your blogs recently but I didn't have any recipes that fit. Nika, Misha and Bailey send a big hug for Valentine's Day!

This means that you actually burn fat by consuming coconut fats (including coconut milk, coconut cream and coconut oil).

These 3 researches from major medical magazines are sure to turn the conventional nutrition world upside down!